Creating Grasshopper definitions is rarely a straightforward, linear process. It usually involves having a general idea of what one wants to accomplish, and a sense of which components will be necessary; however, the process almost always involves extensive testing, false starts, discoveries, and iterations along the way.

As an example, consider creating a Grasshopper definition which can create elliptical towers: 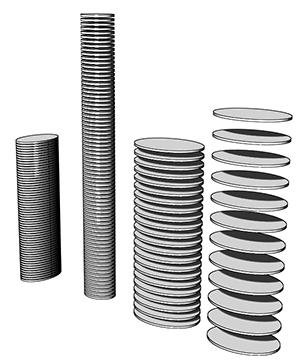 One way of creating this definition is shown in the following step-by-step procedure.

2. Double-click in the Grasshopper canvas to search for and insert the Ellipse component (or Curve > Primitive > Ellipse). 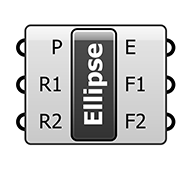 Notice that when the component is placed on the Grasshopper canvas, it is automatically previewed in Rhino, on the basis of its default values: 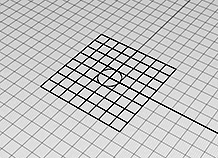 However, we want the component to produce variable-sized ellipses. Therefore, we need to introduce variable input in the form of number sliders.

3. Double-click in the Grasshopper canvas to search for and insert the Number slider component (or Params > Input > Number Slider).

4. Double-click on the label of the number slider (“Slider”) to adjust its values as shown below:

This will allow the slider to generate values between 0 and 50, with a precision rounded to three decimal points. Its initial value is set to 10, but that value is variable.

5. Copy and paste the first slider to create another slider. Double-click on this slider and change its name to Radius 2.

Notice how this affects the Rhino preview:

The ellipse is now shown with radii of 10 units. Adjust the number sliders to see how the preview is affected.

7. Having created a base ellipse of variable size, we now need to begin stacking multiple copies of the ellipse. We’ll do this by copying the ellipse vertically. Grasshopper does not have a Copy component; instead, we use the Move component — with the knowledge that the original ellipse will still preview in its original location.

Double-click in the Grasshopper canvas to search for and insert the Move component (or Transform > Euclidean > Move):

The Move component requires two forms of input, which you can see by hovering the mouse over the input labels (G and T). Input G (Geometry) requires a drawn or modeled object — such as an ellipse. Input T (Motion, or Translate) requires a direction/magnitude in the form of a vector. Notice that by default, input T is set to a vector 10 units long in the Z-direction (0.0,0.0,10.0).

Notice how this affects the Rhino preview:

A new ellipse is previewed 10 units vertically above the original ellipse.

However, we need multiple ellipses, placed at a variable distance (i. e., floor-to-floor height) above the original ellipse. We will need to do something different for the T input on the Move component. Specifically, we will need to provide to this component as input a list of numbers corresponding to the vertical positions of the floors.

9. Double-click in the Grasshopper canvas to search for and insert the Series component (or Sets > Sequence > Series):

The Series component generates a list of numbers according to input parameters. Hover the mouse over the input labels (S, N, and C) to find out what is required for input.

The S input requires a single number, the start of the list. Assuming we want the first floor of our tower to be on the XY plane, S can be set to 0 (zero). The simplest way to do this is to right-click on the S label and choose Set Number from the dropdown menu. (Note that by default, S is already set to zero.)

10. Insert two number sliders with the following values (note that Number of Floors is set to Integer rounding):

And then connect the sliders to the Series component as shown below:

11. Hover the mouse over the S output on the Series component. You should see the list of numbers generated in accordance with the input values. Now, it would seem that we could simply connect the S output from Series to the T input on Move — but if we do this, Grasshopper will generate an error message at the Move component:

The problem is that the Move component expects vectors as input at T; we have given a list of numbers, not vectors. To fix this, we need to insert a Unit Vector component between the Series and Move components.

12. Double-click in the Grasshopper canvas to search for and insert the Unit Z component (or Vector > Vector > Unit Z):

13. Reconnect wires as shown below (note: you can manually disconnect wires by right-clicking on input or output nodes and selecting Disconnect):

Once again, notice how this affects the Rhino preview:

Adjust all four number sliders to see the effect on the Rhino preview.

14. That completes the basic definition. Additional steps might include:

Extruding the floors to a specified or variable thickness (as shown in the image at the beginning of this post);

Varying the elliptical radii along the height of the tower;

Constructing a “skin” on the tower.